This site is no longer being updated. Check out the new site at www.rpgrambler.com

Ok, so really I just found a book in my basement, but it’s a book that I had forgotten about, and my basement is indeed dank. Somehow or another it ended up in a box that ended up in the basement when we moved in, and it had been there ever since. Now that we are moving out of this house and I stumbled upon it again, it will take its rightful place among my gaming books – though it technically isn’t a “game book.”

What is this mysterious tome, you ask? It is this: 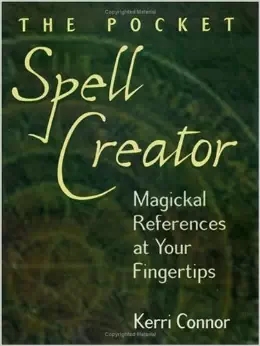 This book is mainly lists of things and the virtues, qualities, and attributes those things are associated with. For instance, “Section 6” is entitled: “Crystals and Stones and Their Associations.” It’s one of my favorite sections. When you turn to section 6, you are presented with an alphabetical list of precious stones and minerals, and things they are associated with. For instance, agate is associated with “courage, strength, love, and protection,” while clear quartz “intensifies energy” and obsidian is good for “grounding, divination, protection” and prevents “negative energy.” There are maybe 50 stones in this section, each with a list of associations like the examples above.

And that’s pretty much the whole book. There are sections on the elements, moon phases, food, plants, months, colors, and more, each with lists of things followed by what these things are associated with. Which makes this book an awesome resource when you are describing magic items and especially when you are crafting magic items and spells.

Crafting a potion of healing? You’ll need sprigs of fresh angelica and juniper among other things, all prepared with a mortar and pestle made of aspen wood, and for the most potency, you should craft such a potion during a new moon, preferably in May (all of these things are associated with healing). Maybe staves of healing can only be crafted out of aspen, and can only be created  in May during a new moon. Making a summoning circle? You may want some powdered obsidian, since it promotes protection, prevents negative energy, and the color black is associated with “binding” and “defining boundaries.” Lepidolite and diamonds are associated with strength, so it seems only natural that these stones would adorn a girdle of giant strength. There is a lot of repetition in the book (there are at least a dozen more herbs alone that are associated with healing), but it’s still a really awesome aid for coming up with ideas like this.

I don’t know if I would buy this book today for what Amazon is selling it for, but I bought it for $10 about 10 years ago, which I thought was a fair price. I’ve certainly spent more money on less useful things for my games.

A study of the Dungeons and Dragons world and its ways

Failure Is Always An Option

Thoughts on RPG's, the OSR, DMing, and playing...

The Game of Wife

Rumblings in the dust

D&D games that I will be running

RPG observations, wisdom and tools from an early adopter

Read on and I will show you another world within this one....

What Do Ya' Reckon?
Red Box Vancouver's Blog